Imagine you are driving to work in the early morning rush hour traffic. It’s still dark and it’s rainy but the freeway traffic is moving along smoothly. Suddenly you notice a change in something. Your BMW is loosing power! A quick glance at the instrument cluster reveals no warning lights and the fuel is still half full. As you frantically scan the mirrors and glance over your shoulder for a quick maneuver to the side of the freeway, the car dies. You’re left stranded, sitting on the side of the road as cars fly by at 70 mph. You attempt to put the hazard lights on but, they too don’t seem to work. As you sit there waiting for help or a tow truck, thoughts come to mind of how late you are going to be and how this will strain your already busy day. You also start thinking about the last time your BMW was serviced but more importantly, how something like this could happen. After all, you take your BMW in when the lights tell you to…

The scenario you have just read is real. The car is a 2002 530i with 33,000 miles. When this new customer pressed me for the underlying reason why she had been stranded, I candidly told her, “lack of maintenance”. When I asked about her service history she explained how good she was about taking the car in when the Service Interval System told her. In 4 years and 33,000 miles, the car had only been in for service twice, once for an oil change and again for the newly stripped down Inspection I Service. With her current lifestyle and busy schedule, she was wholeheartedly willing to accept a minimalist approach to caring for her car, especially if it was backed by the manufacturer. She was convinced BMW’s do not need as much attention as they did even 3 years ago. It was then that I tried to enlighten her that “Free Maintenance” came with a price – you pay for it up front with the purchase of the car and again after it expires to make up for the neglect.

It seems as though vehicles are expected to run perfectly every time they are driven. For the most part, BMW drivers take their cars reliability for granted. There should be one more Law of Physics lesson taught at an early age – machines require maintenance. BMW owners rarely envision a lack of preventive maintenance as causing reliability problems with their ultimate driving machine.

A good case and point is this customer’s 530i. The car had an original battery which was no longer capable of offering a reserve storage charge. It was only capable of starting the car solely on its surface charge and as long as the alternator maintained the appropriate 13-14 volts in the electrical system, everything functioned fine. Keep in mind the failing battery required constant charging thereby placing a continuous load on the alternator. As this customer drove along, she unknowingly placed a depleting load on the charging system and battery by running a number of accessories (lights, wipers, A/C, etc.) due to the driving conditions. These accessory loads coupled with the battery charging requirements may normally have worked the alternator to its maximum capacity but not caused a failure. Unfortunately the alternator was already destined to fail; not because of age but because of lack of simple maintenance. All modern alternators require cooling. The alternator of this model is air cooled, as are a number of other BMW models. The alternator has to dissipate the heat generated during charging or it will eventually fail from repeated overheating. During this car’s history, leaves and other road debris have been sucked into the alternator cooling duct and then become crammed into the back of the alternator preventing proper air flow. 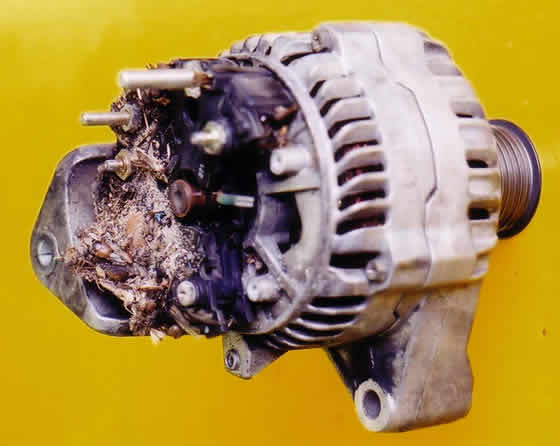 The load placed on this car’s charging system that day was too much and when the alternator failed, the battery could offer no assistance and the car ceased to run. This is just one of many situations that I have experienced in the last few years that could have been easily prevented if a sensible level of maintenance was performed.

A simple maintenance item that is now commonly neglected is the fuel filter. Fuel filters that used to be changed at 15,000 mile intervals must now provide fuel system protection for at least 60,000 miles. These filters are expected to last for that period of time although no appreciable design change has transpired. More importantly, the lack of servicing allows possible fuel contaminants to go unchecked. Added cost, poor fuel mileage and sometimes engine damage are all the results of this poor maintenance approach.

At my shop, we regularly change air filters at 20,000 mile intervals due to the enormous accumulation of silt/grit clogging the filter. Air filters protect engine cylinder walls, pistons and piston rings from ingesting grit that would ruin an engine in a very short time period. The new style paper air filters with an added layer of foam are expected to last up to 60,000 miles. As well as contributing to poor fuel mileage, the long term ramification is an engine that may start burning oil by 80,000 miles because of the grit that makes it through the filter.

Aside from engine wear, extending air filter change intervals contributes to air mass meter problems. The sensitive air mass meter is located directly downstream of the air filter and can be greatly affected in its operation by just a film of dirt. This meter is the determining sensor for the engine air/fuel ratio and once its readings are off, a host of problems will develop. It is not uncommon to see fuel trim adaptation values beyond limits, engine stumble, hesitation, or even cylinder misfires.

Some of the more complicated examples of preventative maintenance include testing the car electronically. Indicators of problems that have not illuminated the Check Engine light/Service Engine Soon light lurk behind the scenes creating changes of which the driver is unaware. These may include adaptive values, sub-system faults or even control unit programming updates. These can sometimes lead to expensive problems but if uncovered early enough, can prevent additional cost or breakdown.

So why is it that cars are only serviced or repaired when an indicator comes on? There are many reasons but one main reason is because as maintenance packages have been introduced, dealers have urged BMW owners to “just follow the service interval system”. Most owners assume that this means the car has a proper maintenance agenda. But who’s agenda? A marketing department who is only interested in getting the car through the warranty period; or you, who expects such a well engineered machine to last for at least 150,000 miles?

If you look at what dictates a maintenance schedule, you will find it is based on the oil change interval. As synthetic-blended oils have been introduced, oil change intervals have been extended thereby pushing back other maintenance necessities. It is not hard to appreciate that when one small problem goes undetected, it will invariably have a domino effect on other components adding to the overall cost of repair. Too often, service programs such as the Inspection II are interpreted by BMW owners as a superfluous list of checks and simple replacements for the here and now. In reality, the checklist is not intended to be black and white. The overall importance is to read between the lines and identify possible problems that will lead to added expense or inconvenience in the miles to come.

Keep in mind the BMW service interval system uses a math model to infer the rate of oil degradation based on collected data. This software based maintenance reminder system is at best a prediction because it cannot directly measure the condition of the oil or detect the presence of contamination. Engine maintenance requirements can also be greatly influenced by ambient air conditions, fuel formulations and by the actual condition of the engine.

Changing oil more regularly can pay off in the long run but it can also equate to draining a lot of serviceable oil. BMW has tried to address this and the environmental impact by using better oils and extending the service interval system mathematical parameters. However, consider that in the span of a decade we have gone from a 3000 mile oil change to a 20,000 mile oil change interval. Because of this, I routinely see engines at 45,000 miles that have had two oil changes and are so gunked up that the engine will have serious problems with lifters, rings and bearings before the 60,000 mile mark. 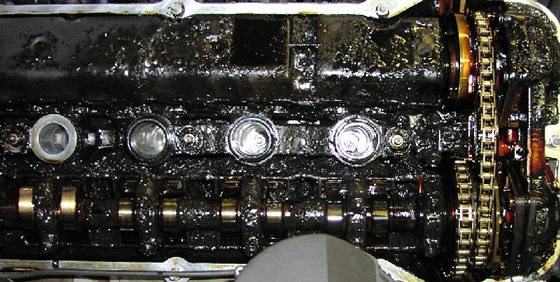 As a general rule, we recommend oil changes depending on each customer’s driving habits. Usually the mileage period for changes is 5000 to 7500 miles. We arrived at this range based on laboratory analysis of oil we drained from customer’s cars.

For comparison, the following picture is of an engine with 82k that we have serviced for its life time. 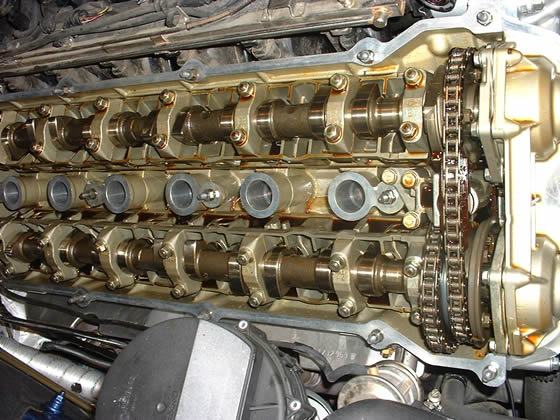 As an aside about oil changes, lately I have seen an unfortunate trend of poorly made off-brand oil filters installed in relatively new cars. Not only are these filters doing a poor job of filtering oil, but with the extended oil change intervals, they are literally disintegrating, adding to the contamination of the engine. When questioned, the customer usually admits to visiting a nearby quick-lube store. No maintenance program is worthwhile without quality parts.

Pro-active repairs have been replaced by a reactive minimalist approach because in the short run, it costs BMW less and is more convenient for you. Plainly put, it’s what works when selling cars. Behind the scenes is a different story. People I know in the industry from the dealer level to the aftermarket community (including engineers) would never subject their own cars to such an insufficient maintenance schedule. BMW’s service interval system is set up for one type of ownership and it is not intended to protect your BMW for the second half of its life. When you consider that there is nothing exceptionally difficult about an accelerated approach to maintaining your BMW, the added years of return will justify the effort.